Are you considering a 70mm or 80mm telescope? Not sure what one to get, or if there is much of a difference between them? How will the experience of either telescope differ? Well, that’s what we will be covering here today.

It may not look like a vast difference to a novice user, but to astronomy enthusiasts, small details like this matter.

This guide is going to compare the two and explain what separates them based on the view they’re able to provide.

What Is The Difference Between a 70mm and 80mm Telescope?

The difference between a 70mm and 80mm is its aperture, which is what the 70mm/80mm refers to.

Known to be a prominent factor of any telescope, the aperture pertains to the clarity and brightness of what you’re able to see.

Considering the image a telescope provides heavily weighs on your viewing experience, many people look for a specific aperture that suits their desired outcome.

So this is where 70mm and 80mm enter the fray. 80mm is, therefore, a higher aperture.

But how much does a 70mm and 80mm differ in clarity?

Aside from slightly varying in magnitude, one of the biggest differences is the max magnification they’re capable of.

The truth is, you only really start to see a significant change in image quality with a larger gap in the aperture. So, comparing a 70mm to a 100mm, for instance.

What You Can Observe

If you’re using a 70mm aperture, you should be able to find and see many celestial objects just fine, but they may not have as much detail as an 80mm.

For instance, when using an 80mm telescope, you’ll be able to see finer details of the moon and planets such as mars. With a 70mm, these minor details may not show themselves at all or could possibly look a little fuzzy.

These specifications alone could make or break a purchase decision for a dedicated astronomy enthusiast.

When you take a look at each aperture’s magnitude, there’s only a slight difference there. A 70mm telescope offers a magnitude of 12.8, and 80mm will sit around 13.1.

Although it’s true there aren’t too many differences between the two; it’s evident that the 80mm reaches a little farther in terms of image quality.

You’ll also find that aperture capabilities will be a factor in the price tag of a telescope, and you may be able to save some money if you decide to go with a 70mm.

Nevertheless, more dedicated astronomy lovers will likely side with an 80mm telescope, as it can offer a few more details in outer space.

Of course, your final decision should come down to personal preferences, but if you want more clarity above all else, you’ll want to take a look at an 80mm telescope.

Many telescopes offer a higher, more refined aperture, but this can also come with a higher price tag.

70mm and 80mm telescopes are an excellent middle ground for many people, and they both allow you to view many prominent celestial objects in our solar system.

Don’t be fooled by any comments online saying one is supreme over the other, as you’ll find many experienced users say they’re pretty happy with 70mm.

The biggest difference between the two caters to minor details of your viewing experience, such as refining surface details on the moon.

What Is A 70mm Telescope Good For?

The 70mm is more than satisfactory for the moon and can give a substantial view of mars, but don’t expect too much detail from the stars. You’ll be able to get a more isolated view of the stars, but you won’t get any kind of real close-up as they’re too far away for this telescope.

Not only could you potentially save some money by choosing a 70mm, but it’ll definitely get the job done for casual viewers of the night sky.

Some people don’t necessarily need to see everything in pristine detail to be mystified.

A 70mm telescope may not offer as much detail as an 80mm, but it’ll still deliver a view you won’t be able to achieve with the naked eye.

With a decent amount of magnification, a 70mm telescope tends to be more than enough for many people.

Those who long for a more detailed view of objects such as the moon or mars are likely to lean toward an 80mm telescope.

This small difference shouldn’t deter you from considering a 70mm, as some casual viewers consider an 80mm to be a little overkill for their needs.

Even if you aren’t able to see every crater on the moon in extreme detail, having a close-up view of the massive object will create an unforgettable experience.

In the same vein, if you aren’t sure which aperture you want to go with, it never hurts to start with a 70mm, as you can upgrade down the road if you feel like it.

Aside from their differences, a 70mm telescope is an excellent aperture to see a vast range of objects in outer space within our solar system.

You’re likely to find different preferences from astronomy enthusiasts online, but don’t let critics sway you in one direction than the other.

There’s no question that an 80mm can provide a better viewing quality, but it isn’t too far off from what a 70mm is capable of.

What Is An 80mm Telescope Good For?

This aperture is one step above 70mm and is the optimal choice for those who are looking for finer details in their image quality. To clarify further, an 80mm telescope can capture more surface detail on objects such as the moon or mars.

It isn’t necessarily a massive jump in viewing quality, but it’s enough to deliver a noticeable difference that many people prefer over a 70mm.

Remember, there’s a chance that an 80mm telescope will be a little more expensive, but it also has better magnification capabilities.

If price isn’t an obstacle for you, most people would suggest you go with an 80mm telescope, as even the smallest changes in clarity are bound to impress.

To those who are just getting started with their first telescope, it’s understandable that these differences don’t seem like much, but once you see it for yourself, you might change your mind.

An 80mm telescope is also the better option if you plan on taking any photos, as it’ll offer a better image overall.

If you have the means, you could test both a 70mm and 80mm telescope to see what’s suitable for you.

Although both are able to deliver significant detail for the moon, an 80mm would be the optimal choice if you want to take a peek at nearby planets.

Even if they’re considered to be nearby, they’re still quite far away in reality, and an 80mm will perform better without a doubt.

Some astronomy enthusiasts are quite happy with lower apertures, while others have a niche preference they won’t stray from.

You’re bound to find conflicting comments online about 70mm and 80mm telescopes, but there are some undeniable truths about their differences.

Regardless of how you look at it, an 80mm telescope is the best choice if you’re looking for more detail any time you view nearby celestial objects.

You’ll be able to see the moon’s surface, including mars, with more clarity than you would using a 70mm.

Is An 80mm Telescope Better Than 70mm?

This question is subjective to some people but based on their actual capabilities, an 80mm telescope is inherently better than a 70mm. Both can provide a satisfactory experience, but the 80mm offers better image quality and magnification.

You shouldn’t see too much difference in cost, so most people tend to choose an 80mm when comparing the two.

You might think viewing minor surface details of the moon and mars aren’t all that important, but this small difference is more impressive than many people expect.

Seeing these objects in outer space is cool enough as is, but by using an 80mm telescope, you get much more than that. Certain features and details of these objects start to stand out and may offer more for you to observe.

If you were to ask any astronomy enthusiast that has experience with telescopes, there’s a good chance they’ll suggest going with an 80mm telescope.

Considering you may be looking to start small with your first telescope, a 70mm comes with its own wow factor, and many telescopes make it easy to upgrade individual parts if you care to.

From another angle, if you don’t care to upgrade or modify your telescope, it’s in your interest to purchase the equipment that’ll offer the detail you want the first time around.

If this article has given you the knowledge you need to make a purchase, it would never hurt to pull the trigger and start out with an 80mm telescope.

You don’t need to be an expert to use a telescope, and an 80mm will provide a viewing experience you’ve never had before.

If you already own a telescope but started out with a low-end aperture, upgrading to an 80mm will feel like a breath of fresh air in comparison.

And if you are looking for some recommendations for either aperture, then I would take a look at each option below from Amazon: 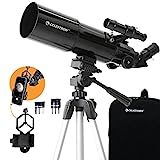