Finding a great astronomy book that was written with adults in mind is a tricky feat. Besides, a lot of the resources out there were created for children and younger people just getting into astronomy.

But thankfully, there are a number of excellent books for the older reader; and there are a range of works too.

From the intriguing history all the way through to the practical application of stargazing.

And then there are some in between too.

The best books will not only help beginners but are suitable for the keen astronomy enthusiast with a thirst for even more knowledge!

And the best part of all of this is. Space and the universe are mesmerizing. There is an almost never-ending amount to discover.

Some of these books will literally transform how you think; or challenge your perceived notions of what you think you already know.

So, I would like to introduce you to some of the best titles and favorites among fellow astronomers and hobbyists alike. 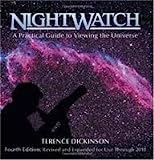 NightWatch: A Practical Guide to Viewing the Universe
Check Price On Amazon

Earth and Space: Photographs from the Archives of NASA
Check Price On Amazon

Space Atlas, Second Edition: Mapping the Universe and Beyond
Check Price On Amazon

The Smithsonian History of Space Exploration: From the Ancient World to the Extraterrestrial Future
Check Price On Amazon

NightWatch: A Practical Guide to Viewing the Universe

“The first three editions of NightWatch sold more than 600,000 copies, making it the top-selling stargazing guide in the world for the last 20 years.

The key feature of this classic title is the section of star charts that are cherished by backyard astronomers everywhere.

Each new edition has outsold the previous one because of thorough revisions and additional new material.

NightWatch has been acclaimed as the best general interest introduction to astronomy. It includes:

This edition includes star charts for use in the southern hemisphere. There are also dozens of new photographs throughout the book that show the latest thrilling discoveries made by current space observatories and probes.”

NightWatch: A Practical Guide to Viewing the Universe
Check Price On Amazon

“The newest edition of The Backyard Astronomer’s Guide includes the latest data and answers the questions most often asked by home astronomers, from beginners to experienced stargazers.

Terence Dickinson and Alan Dyer provide expert guidance on the right types of telescopes and other equipment; photographing the stars through a telescope; and star charts, software and other references.

They cover daytime and twilight observing, planetary and deep-sky observing, and much more.

With over 500 color photographs and illustrations, The Backyard Astronomer’s Guide is one of the most valuable, beautiful, and user-friendly astronomy books ever produced.”

hanks to Dickinson’s familiarity with Hubble’s history and discoveries and his access to top Hubble scientists for insight and accuracy, the text includes facts and tidbits not found in any other book.

Combined with 330 brilliant images, the clear, succinct, and illuminating narrative brings to life the fascinating forces at work in the universe.”

Earth and Space: Photographs from the Archives of NASA

“Take a tour of the universe with this breathtaking collection of photographs from the archives of NASA. Astonishing images of Earth from above, the phenomena of our solar system, and the celestial bodies of deep space will captivate readers and photography lovers with an interest in science, astronomy, and the great beyond.

Each extraordinary photograph from the legendary space agency is paired with explanatory text that contextualizes its place in the cosmic ballet of planets, stars, dust, and matter―from Earth’s limb to solar flares, the Jellyfish Nebula to Pandora’s Cluster.

Featuring a preface by Bill Nye, this engaging volume offers up-close views of our remarkable cosmos, and sparks wonder at the marvels of Earth and space.”

Earth and Space: Photographs from the Archives of NASA
Check Price On Amazon

Space Atlas, Second Edition: Mapping the Universe and Beyond

“For space enthusiasts, science lovers, and stargazers, the newly revised edition of National Geographic’s enduring guide to space, with a new introduction by American hero Buzz Aldrin, combines thoroughly updated maps, lavish photographs, and elegant illustrations to chart the solar system, the universe, and beyond.

A guided tour of the solar system, the Milky Way galaxy, the universe, and beyond, with detailed maps and fascinating imagery from recent space missions partnered with clear, authoritative scientific information.

Starting with the sun and moving outward into space, acclaimed science writer and physicist James Trefil illuminates each planet, the most important moons, significant asteroids, and other objects in our solar system.

Moving beyond, he explains what we know about the Milky Way and other galaxies beyond–and how we know it. To celebrate the 50th anniversary of his moonwalk, astronaut and American hero Buzz Aldrin offers a special section on Earth’s moon and its essential role in space exploration past and future.”

Space Atlas, Second Edition: Mapping the Universe and Beyond
Check Price On Amazon

The Smithsonian History of Space Exploration: From the Ancient World to the Extraterrestrial Future

“The Smithsonian History of Space Exploration is a comprehensive history of international space exploration paired with photographs, illustrations, graphics, and sidebars on key scientific and technological developments, influential figures, and pioneering spacecraft.

The book examines space exploration’s origins in the pioneering work undertaken by the ancients of Greece, Rome, and China, and moves through the great discoveries of Renaissance thinkers including Copernicus, Galileo, and Kepler.

It offers new insight into well-known moments such as the launch of Sputnik 1 and the Apollo Moon landing and explores the unexpected events and hidden figures of space history.

Presenting the technological and mechanical breakthroughs enabling humans to explore far beyond our own planet in recent decades, it also speculates on the future of space exploration, including space tourism and our possible future as an extraterrestrial species.

This is a must-read for space buffs and everyone intrigued by the history and future of scientific discovery.”

The Smithsonian History of Space Exploration: From the Ancient World to the Extraterrestrial Future
Check Price On Amazon

Factors To Consider When Choosing An Astronomy Book

The truth is, there are is no shortage of astronomy books on the market. So how do you select one that is suitable for you?

Are you a beginner seeking more detail, or are you interested in particular areas of astronomy or content that is a little more advanced?

Do you want a generalized overview or do you want to delve deep into certain topics, such as: the stars, planets, black holes or asteroids?

Consider some books are more of a casual light read whereas others can be a little more in-depth!

Consider How You Will Read

Of course, the sturdiness and design of the book will have a big impact here.

Are you going to be skimming through or do you want to read it start to finish?

Is it a book for the bookshelf or one that is to be used?

Some astronomy books are a lot more image-focused and heavy than others.

This can be great, or not so much, depending on your preferences and uses for the book.

Astronomy and the universe are fascinating to study.

And what better way than to tap into the knowledge and experience of the experts.

Whether you are interested in stargazing, or just the almighty wonders of space, there is a book out there for you.

These listed here, are undoubtedly the ones to start with!