Astronomy Scope is reader-supported. Just so you know, I may collect a share of sales or other compensation from the links on this page - at no additional cost to you. This includes Amazon. 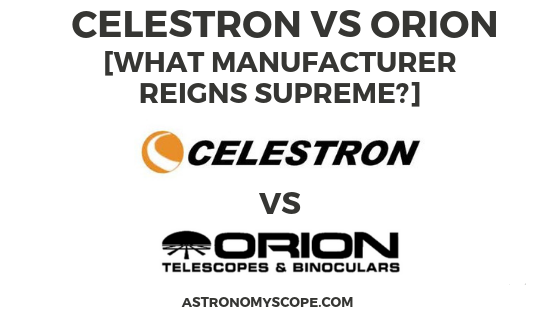 Celestron and Orion are two of the most common, widely available and highly-rated manufacturers for Astronomy Equipment. If you are looking for a new telescope, component for your telescope, or even a pair of binoculars, then these two brands are going to have options available for you.

If you are new to astronomy, it will be really hard to make a decision out of the two. They’re both high-quality and well-respected brands, and they both have a comprehensive range of equipment with many choices on offer. So, if you’re not quite sure which brand is best, which should you go for?

The truth is that if you’re here looking for a major difference between the brands or a significant reason why one is better than the other – then you’re not going to find one.

Why is this? It’s actually quite surprising to discover, but both brands have their astronomy equipment produced by the same company. They’re actually two umbrella companies and subsidiaries of Synta.

When you compare the two brands, and especially models like for like, you’re actually find that they are pretty similar in terms of specification. Personally, I am and have always been a big fan of Celestron for the more premium, expensive telescopes. I prefer the ease of use, and the many models that they have created. There’s also another significant reason why I would opt for a Celestron over an Orion – especially if you are a first time buyer.

Now, remember that choosing a Celestron over an Orion and vice versa will not necessarily get you better specification. Sure it can, but that will be if you are comparing Apples to Pears (or a premium Celestron vs a cheaper Orion and vice versa). However, one of the main reasons why Celestron appears to be a safer choice – is that it has a significant amount more customers reviews and case studies available to access. You can literally see how a model you are considering is working for hundreds of other astronomers. I love being able to read reviews before I go ahead and invest in a premium product (like a telescope) and Celestron’s large customer and user base enables this.

Beyond this, Celestron appear to provide better aftercare, and for every telescope you purchase you will be entitled to a 2 year warranty. For a piece of equipment as specialized and fragile as a telescope, this warranty could be a lifesaver.

For the most part, a purchase of a telescope is a big investment. Manufacturers like Celestron and Orion know this so they are always going to provide you with a good level of customer support and aftercare.

Now considering the above, lets take a look at some of the signature models that each brand have available:

Celestron offer a number of different types and styles of telescopes but if you are looking for one of their best models that also is at the lower end of the price range – the Celestron 31045 AstroMaster 130 EQ Reflector Telescope is a great option. 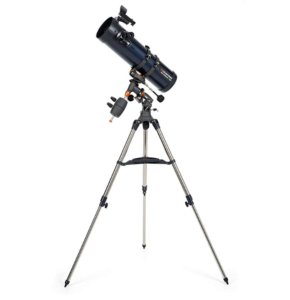 It is one of the quickest and easiest telescopes to set up and doesn’t require any tools. It has a 5.12″ Aperture and it also provides you with erect clear image optics (the right side up – unlike a lot of other telescopes). It is primed on a pre-assembled steel tripod and a German Equatorial mount which will enable you to accurately locate and track objects in the sky. It is great for observing the moons and planets.

You also receive a StarPointer finderscope and two eyepieces (20mm and 10mm) to give you flexibility in your viewing.

At a very reasonable price and with a lot of positive reviews on Amazon; this would be a great choice for a new telescope. 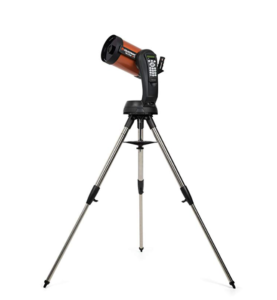 Celestron also provide a range of computerized telescopes in their NexStar Series, these are some of the most cost-effective and powerful telescopes available.

The Celestron NexStar starts with their 4SE model, but this scales all the way up to the 8SE (4SE, 5SE, 6SE and 8SE). The difference between each model is the amount of Aperture that the telescope has – so you can choose one depending on the amount you require.

The 4SE is around half the price of the 8SE (because it is half the spec), but its good there are various models because then you can choose what you can afford.

If you have the budget, the 8SE will be the way to go.

The NexStar series is a fantastic choice for all astronomers because it is so powerful but also so easy to use. It has an in-built tracking system that enables you to identify and follow over 30,000 sky objects. It’s also lightweight and easily portable making it a great choice for astronomy on the go. If you are serious about astronomy, a NexStar Telescope is the way to go.

I personally have the NexStar 6SE and wrote a full comprehensive review which you can read here.

One of the best models from Orion is the SkyQuest range; their SkyQuest XT6 Plus Dobsonian Reflector Telescope is perhaps the pick of the bunch for astronomy beginners. 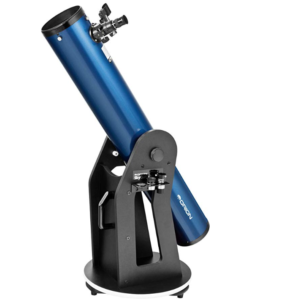 This is not the most powerful telescope available, but it’s an excellent start and one that you should not need to upgrade too soon from (like you would with a lot of entry-level beginner telescopes). It has a 6 inch aperture and a f/8 focal ratio so you will be able to observe planets, galaxies, and stars like the Orion Nebula. You also receive a 25mm and a 10mm Sirius Plossl eyepiece, which are great for altering your views (wider angle or higher magnification) which helps you and what you are able to observe.

Considering it’s price, it’s ease of use and it’s weight – it makes an great choice. It’s designed to be portable, so you can always take it outside with you and on the go if you wanted. Plus it has a white base which makes it easy to observe even in dark conditions. This is a great choice for new astronomers.

If you have a little extra in the budget and are looking for a top of the range telescope; you’ll want to consider the Orion Sirius 8 EQ-G GoTo Reflector Telescope.

It is considerably more expensive than the SkyQuest above but it comes with considerably better specification and automation functionality. It has an 8 inch aperture and parabolic mirror and a short focal length (f4.9) which makes it an ideal telescope for astrophotography. It will give you a wide-bright view of the night sky.

Its fixated on a sturdy tripod, and comes with a GoTo mount that has a computerized database of over 42,000 celestial objects to explore and photograph. There is even a built-in autoguider interface and periodic error correction (PEC) that you can use to align to specific objects in the sky.

Overall, it’s very hard to make a direct call between Celestron and Orion. The main reason I would advocate a Celetron is because they are so widely used and there is a lot of customer feedback and case studies you can read and help make your decision. They have a 2 year warranty that covers all telescope faults plus if you wanted to buy extra components or parts following your warranty it will be much easier to find from other Celestron Owners and sellers who may be selling spare parts. Celestron provide excellent aftercare, so if you find a fault, they’ll either fix it or send you a new one free of charge.

Nonetheless, Orion do have a number of great telescopes, I particularly like the SkyQuest range.

So and to conclude, it all depends on the exact model you are considering and its specific spec rather than it is a Celestron or an Orion. But for the most part, you will do very well to opt for any one of these two brands.

Or if you want more information, click here to read my comprehensive Telescope Buyers Guide.

I am a passionate astronomer who loves to stargaze and observe the night sky. Astronomy Scope is the website where I share and document things about astronomy and help other astronomers to enjoy astronomy even more.

I hope you love the products I recommend! Just so you know, I may collect a share of sales or other compensation from the links on this page. AstronomyScope.com is independently owned and the views expressed here are my own.

Astronomyscope.com is a participant in the Amazon Services LLC Associates Program, an affiliate advertising program designed to provide a means for sites to earn advertising fees by advertising and linking to Amazon.com. Astronomy Scope is compensated for referring traffic and business to these companies.