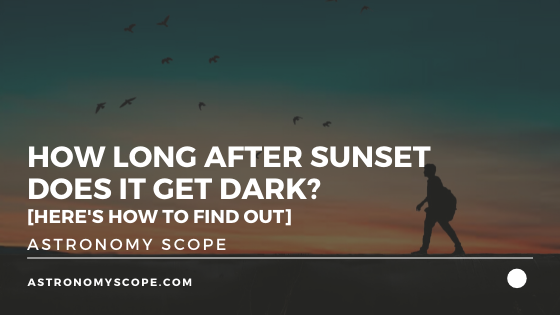 I hope you love the products I recommend! Just so you know, I may collect a share of sales or other compensation from the links on this page. AstronomyScope.com is independently owned and the views expressed here are my own.

As per experts, it needs to get dark before you can set up your telescope and get lost while stargazing. If you observe too soon after a sunset then you won’t be able to see what you are looking for. Hence, it is very important for all astronomers to know when exactly it gets properly dark in order to have a fruitful experience.

So how long after sunset does it get dark? It is not possible to come up with an accurate result every time. The time it takes differs in different regions on earth. Besides, there are many factors which happen to influence the speed at which it gets dark after sunset. These include: Distance from the Equator and Latitudes and the Earth’s tilt and the different seasons. However, there are many online websites and apps available currently which will help you get a more accurate time. A combination of your insight/experience will also aid you.

To some the answer to this question may not seem to be overly complex. But the fact that it is a complicated topic cannot be denied. And for this reason, everything that you need to know have been mentioned next for you:

What Does Sunset Time Mean?

Before we dive into this, firstly you need to know what do you mean by sunset time. In astronomy, sunset time can be explained as the moment when the Sun (upper limb) vanishes below the horizon. When you are observing a sunset, atmospheric refraction, near the horizon, will distort the sunlight/sun rays in such a manner that the solar disk geometrically will be around one diameter below the horizon. So, it is safe to say sunset is different from twilight. Hence, here it is crucial to mention that having a proper understanding of twilight next will definitely help you to know when it will be just dark enough in your region to enjoy what the night sky has to offer.

How Long Does It Take To Get Dark After Sunset? 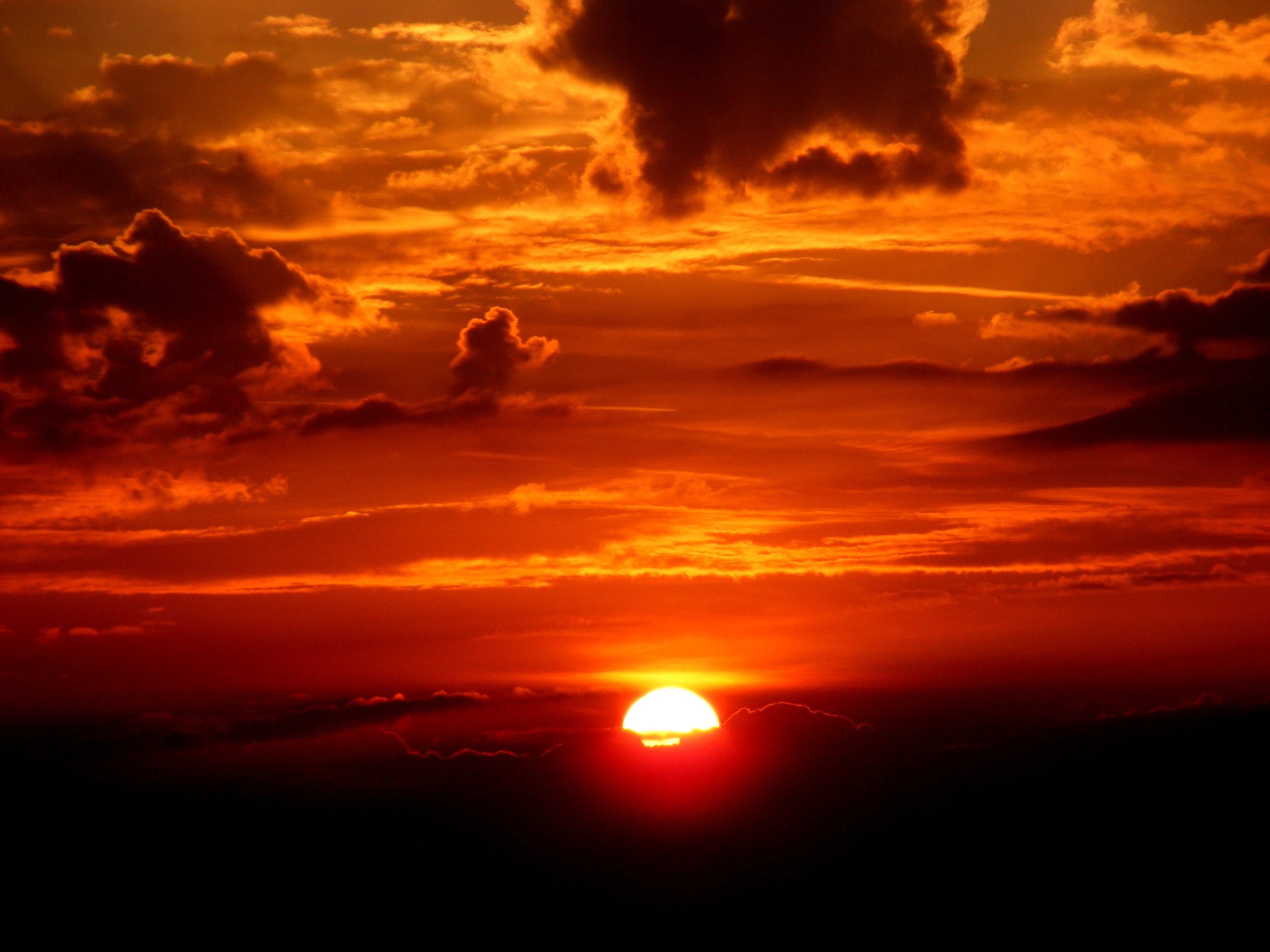 This is the first phase and it starts when the sun first goes beneath the horizon and ends when it happens to reach around 6-degree beneath the horizon. Civil Twilight is the perfect time to track or view Mercury and Venus as it is possible to see bright object during this phase. However, as still light pollution is there in the sky, it is not possible to observe more than this.

Now, it is quite evident why getting familiar with these three mentioned phases is recommended if you accurately want to know how long after sunset does it get dark.

Does It Get Dark Before Or After Sunset?

When Astronomical twilight ends, night time will begin during which zero to insignificant amount of light pollution is being emitted from the sun. Thus, in night time there is no influence of the sun at the horizon. Hence, during night stargazing, the sun in no way will affect the astronomers’ viewing capabilities.

On the other hand, the reserve of the three mentioned phases will lead to a sunrise. So, after night time you will observe astronomical twilight first, then nautical twilight, civil twilight and finally sunrise.

Hopefully, by now you can understand how much time it takes to get dark before and after sunset and sunrise. Yet, you must be wondering exactly how long after sunset it get dark in your region.

But, first of all, you need to understand the not all places are the same on this earth, and this is the reason why in further north region it is observed that twilight last longer in summer. Besides, there are many factors which happen to influence the speed at which it gets dark after sunset. Once you know about these factors, you will be able to tell when it will get dark after a sunset in your region.

#1 Distance From The Equator and Latitudes

The imaginary line that run along the middle of the Earth between the two poles is known as Equator. Constituting the parallel of 0-degree, it happens to divide the earth into north and south hemisphere. The latitude which is a geographic coordinate specifies, in terms of north and south, the position of a place on the surface of the Earth. Latitude is used to determine night and day’s duration along with the duration of the different twilight phases. The distance of that particular place from the equator will help you determine how soon the sun will set in your region.

When further north is taken into consideration during March equinox to September equinox, the timing of sunrise will help you determine the timing of the sunset if you rising in that particular region. Because of the tilt in the northern hemisphere, the later the sunset are and the earlier will be the sunrise in this region.

#2: Earth’s Tilt and The Different Seasons

Duration of a day is observed to be longer during the summer than in winter. So, even the duration of the twilight will be longer in summer time. On the other hand, because of the elliptical orbit and the tilt of the Earth of 23.5-degree, in summer, the north hemisphere will get more sunlight in winter. This is mainly because the tilt towards the sun in this part of the hemisphere. By understanding how this tilt can affect the weather and the duration of sunset and sunrise, you can know the how long it will take in your region.

Here it is important to mention that, it is not possible that the tilt will remain constant. So, as a result, the calculation to determine the timing of the twilight can be a bit difficult. However, the fact that the earth tilt is generally aligned with the North Star will help to get an accurate estimation.

Researching and understanding these factors will help you understand how this phenomenon works, which thereby will help you to know when and how fast it will get dark after a sunset in your region.

Why Is It Still Light After Sunset? 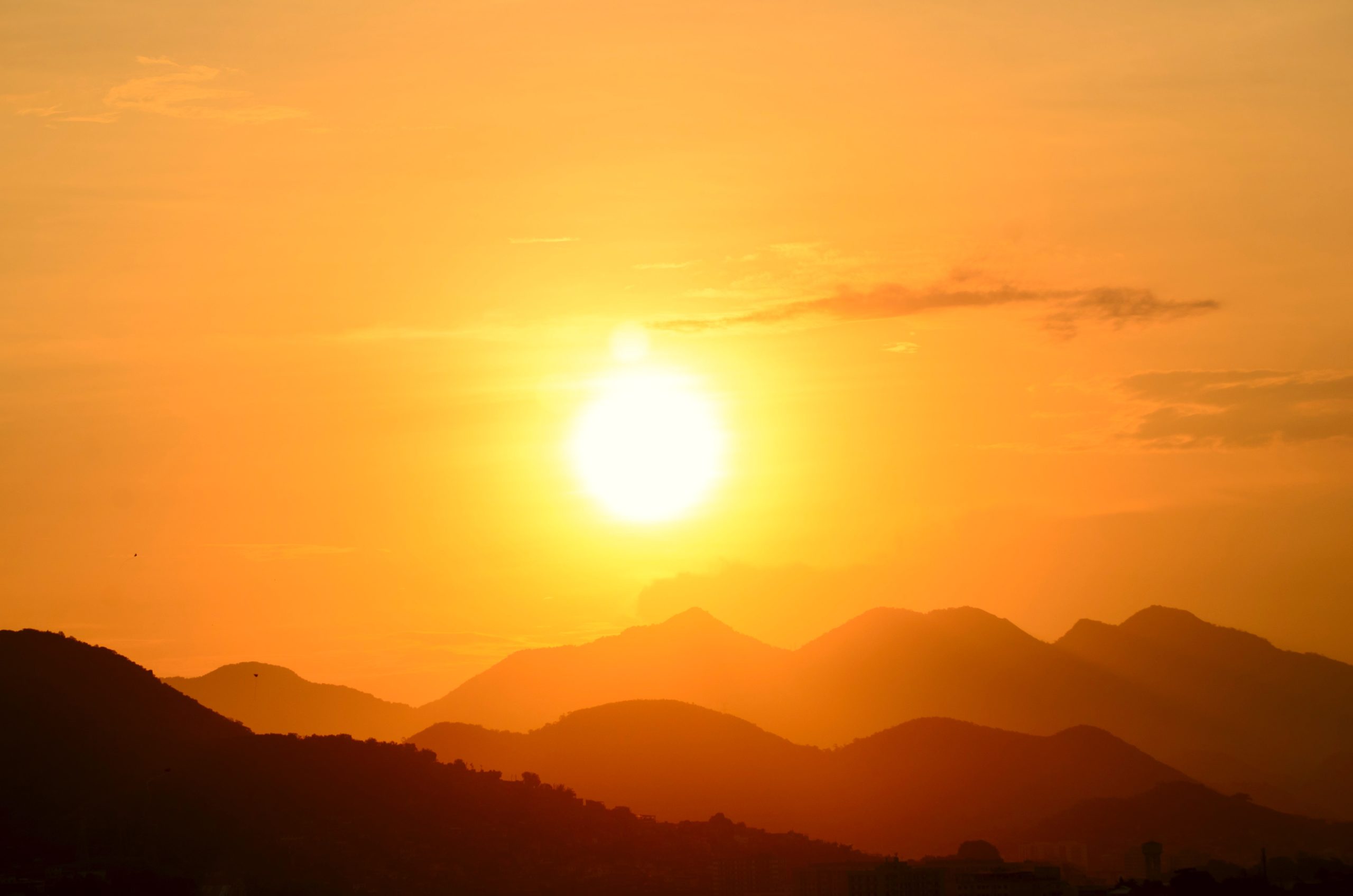 This phenomenon is possible as the sunlight happen to hit the gas molecules (for example nitrogen and oxygen) present in the atmosphere. The gas molecule is responsible behind the bouncing effect of the sunlight which are then scattered. The scattered light happens to hit of eyes making us see light a lit-up sky even if the sun has set. This phenomenon is the reason behind why the twilight has three different phases. And this is also the reason why we still see a bit of light even after the sunset.

There you have it, all that you need to know to know how long does it exactly take to get dark where you reside. You must understand that with enough knowledge and experience you can get better at determining the exact time.

Yes, it is not possible to come up with an accurate result every time because of the different factors. However, there are many online websites (like this) and apps (for mobile – both iOS and Android) available currently which lets you know how long after sunset does it get dark. A combination of your insight/experience and this kind of help will surely work!

I am a passionate astronomer who loves to stargaze and observe the night sky. Astronomy Scope is the website where I share and document things about astronomy and help other astronomers to enjoy astronomy even more.

Astronomyscope.com is a participant in the Amazon Services LLC Associates Program, an affiliate advertising program designed to provide a means for sites to earn advertising fees by advertising and linking to Amazon.com. Astronomy Scope is compensated for referring traffic and business to these companies.