There is something about knowing where a product is made before we want to buy it. Besides, it helps us to get a better understanding of quality. But what about the Celestron brand, and their extensive range of telescopes specifically. Here is what you want to know.

So, where are Celestron Telescopes made? Celestron Telescopes are engineered, developed, and manufactured in Torrance California, the United States. However, as a subsidiary of Synta Technology Corporation of Taiwan, Celestron does source all of their telescope components and parts from China where they are originally made.

In fact, Celestron has had a business relationship with Synta for over 18 years.

It was back in 2002 that Synta purchased Celestron from the original telescope company, Tasco.

And while a lot has changed since then; the astronomy equipment space is in many ways the same.

Synta is to do this day, the global supplier of privately labeled astronomy equipment worldwide.

They are actually the same company behind Meade, Orion Skywatcher too.

And they don’t just focus on telescopes, either.

Binoculars, tripods, mounts; all the astronomy equipment you could imagine.

So it’s the same setup with Celestron Binoculars too.

But what does this all mean for quality?

Celestron is widely recognized as one of the best brands of astronomy equipment – providing a range of telescopes at different price points and for different use cases.

As such, some Celestron telescopes are naturally better than others.

And at the same time, not all Celestron telescopes work the same way.

Then there are pros and cons to each telescope design, regardless of the manufacturer too.

And while you do certainly read and hear of bad Celestron reviews and press, for the most part, this company has a solid reputation as a trusted supplier of astronomy equipment.

Which Celestron Telescopes Are Best?

The best Celestron telescope will vary between individuals, along with how they want to work with their telescope and what they want it to be able to do.

Celestron does not cater to one specific type of consumer.

Now it’s only logical to assume that if the wrong telescope was used in the wrong context, it wouldn’t be fit for purpose.

For instance, attempting to use a 4″ aperture Celestron telescope to see Deep Sky Objects (DSOs) – it just will not happen.

So, the best Celestron telescope will differ accordingly.

If you are looking at a computerized, powerful telescope then the Celestron NexStar 8SE is a best-seller in the 8″ aperture category:

However, if you wanted a much more affordable, point and observe telescope suitable for beginners, then the AstroMaster range would be for you: 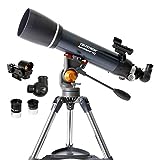 Ultimately, you need to conduct a little research and consider all the relevant factors; portability, durability, price, accessories included, etc.

That being said these two product lines are excellent ones to start looking at.

That’s how Celestron telescopes are made.

But you’d be surprised at how many of the other big astronomy equipment brands and manufacturers do the same.

And don’t let it put you off.

Celestron has a fantastic, and well-deserved reputation.

And while it may sound a little laborious, it hasn’t really impacted the quality.

Are Celestron Telescopes Made In China

The components of Celestron telescopes are made in China, but the telescope is put together and made from such components in California, the United States.

Is Celestron A Chinese Company?

Celestron is a US-based company, founded by Tom Johnson in California in 1964, where they are still headquartered to this day. However, they have been purchased regularly by larger, international companies over the years. Currently, an Asian company owns Celestron outright.